Please provide an overview of the existing literature, experiences and project examples on climate, gender and corruption. What are some of the gaps in research and practice, and what have we learned so far on how gender transformative approaches can make a difference in curbing corruption with regards to climate change mitigation and adaptation and a just energy transition?

Development goals (such as the SDGs) can be mutually reinforcing. For example, climate change (SDG 13), which is a major challenge of our times, could significantly benefit from advancements in other areas such as corruption control (SDG 16) and gender equality (SDG 5).

Gender blind climate actions that ignore diversity and inclusion could result in climate change adaptation and mitigation interventions being vulnerable to corruption, reducing the effectiveness of programmes and leading to further marginalisation and damaging effects on women and other excluded groups.

Applying a gender lens to anti-corruption in climate actions could help in understanding how programmes and interventions can be made inclusive of and sensitive to the needs of women and girls and other groups at risk of discrimination. Moreover, such a method is crucial to understanding the risks of gendered forms of corruption and consequently to applying appropriate mitigation strategies.

• Importance of interlinking gender and corruption in climate actions

There is limited evidence of gender transformative approaches to counter corruption in climate interventions in the public domain. This Helpdesk Answer proposes ways to consider anti-corruption in climate actions through a gender lens, based on examples from approaches in other sectors. Disclaimer: The answer uses a binary understanding of the concept of gender (as men and women) solely because the available evidence follows this approach. There is no intention of diluting identities on the gender spectrum. 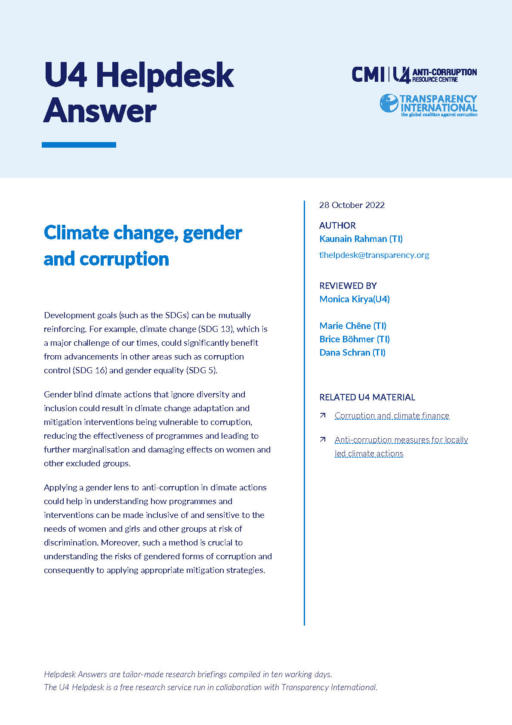