What aspects of the gendered impact of corruption are included in the UNCAC and the UNCAC process? What are the arguments for including a gender sensitive approach in the UNCAC and UNCAC mechanisms? What has already been done or attempted to structurally include gender mainstreaming in the UNCAC?

The United Nations Convention against Corruption (UNCAC) is the “only legally binding universal anti-corruption instrument”. While the convention’s legal text does not reference gender, there are increasing efforts to apply a gender sensitive approach in UNCAC implementation, especially by United Nations Office on Drugs and Crime (UNODC) by integrating a gender perspective into “every stage of the programming cycle”. A gender sensitive approach is seen as more advantageous than gender neutral mechanisms (which in reality are gender blind) in adequately addressing anti-corruption interventions by considering the concerns and experiences of “men” and “women”.

1. Why should gender be included in the UNCAC?

2. Considerations of gender in UNCAC

3. How could gender be mainstreamed into the UNCAC

There is limited availability of information in the public domain concerning mainstreaming gender in the UNCAC. In this answer, the concept of gender is conveyed as a binary understanding of men and women solely because this is where research can support open-source findings. There is no intention of diluting the rainbow representing the community of lesbian, gay, bisexual, transgender, and intersex persons. 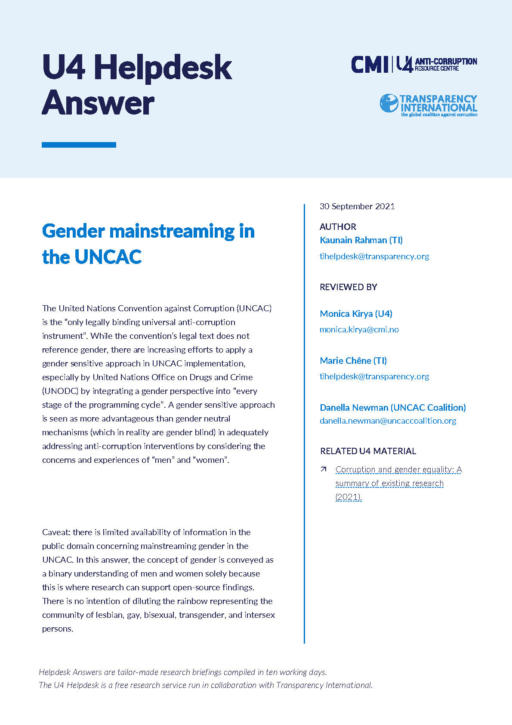