Please provide an overview of the problem of illicit financial flows in Mozambique, including: estimated losses caused, assessment of the legal and institutional framework to prevent these flows, a comparison with aid flows into Mozambique in the last couple of years, progress made in the last years to tackle the issue (for example, efforts on asset recovery), challenges, current and future risks.

Over the past decade, the concept of illicit financial flows (IFFs) has gained traction within the international development community. According to some calculations, illicit outflows from Africa, for example, surpass the levels of development aid received by the continent, which deprives countries from resources needed to fund public services, improve infrastructure and fuel economic growth. There is, however, a lack of clarity regarding the definition of IFFs, which makes them difficult to delineate, measure and study.

This U4 Expert Answer explores the issue of IFFs in Mozambique. It starts by providing some general background on the issue and its importance for development and the African continent. The second section looks at the main sources of IFFs in Mozambique, including factors such as the high levels of informal economic activity, corruption, illegal activities such as poaching and commercial practices such as trade mis-invoicing. The third section then gives a quick overview of the main regulatory and institutional framework in place to prevent the proliferation of IFFs. The final part reviews some of the main challenges that Mozambique faces in its fight against IFFs. 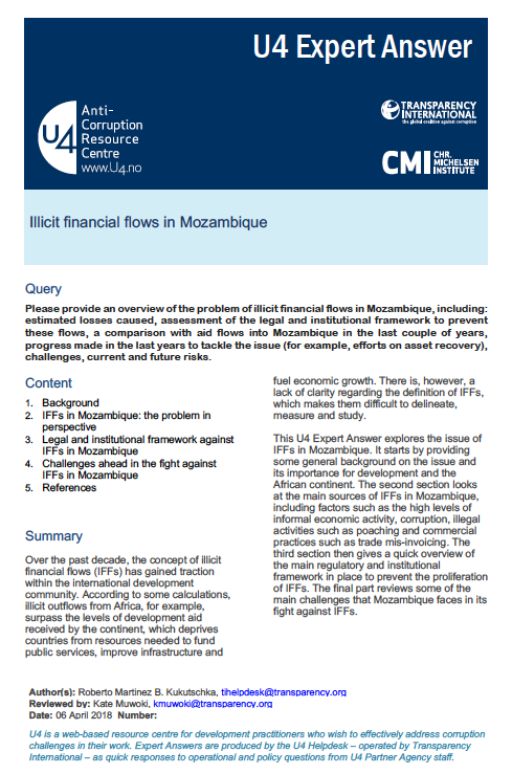