In light of the OECD recommendation 6.iv of the Council for Development Co-operation Actors on Managing Risks of Corruption, published in December 2016, to "Verify publicly available debarment lists of national and multilateral financial institutions during the applicant’s selection process; include such lists as a possible basis of exclusion from applying for official development assistance (ODA) funded contracts", please provide:

i) an inventory of publicly available debarment/sanction lists, and a short description of background, purpose, etc., and why they are/not suitable to consult in ODA funded contract application processes

iii) any other useful information to investigate what lists and why they should/not be consulted in the application process of ODA funded contracts to address risks of corruption and other irregularities, financing of terrorism, money laundering, etc.

Debarment is an effective method to preclude sanctioned companies from becoming repeat offenders and acts as a deterrent. However, sanctions regimes differ considerably; for example, while multilateral banks have a criterion for sanctions based on collusive practices, they are absent in EU legislation. Nevertheless, public debarment lists that may prove useful in official development assistance (ODA) contracting have been listed in this answer. Further, certain points of note, especially concerning the importance of beneficial ownership registers in making blacklists effective, have been highlighted.

The publicly available sanctions lists presented in this answer are not exhaustive. The lists deemed to be most suitable for ODA funded contracting have been included. Moreover, there remains a lack of consensus in terminology (sanctions/debarment/blacklists) across organisations. This answer refers to debarment lists that are based on entities known to indulge in corruption/fraud/misrepresentation. 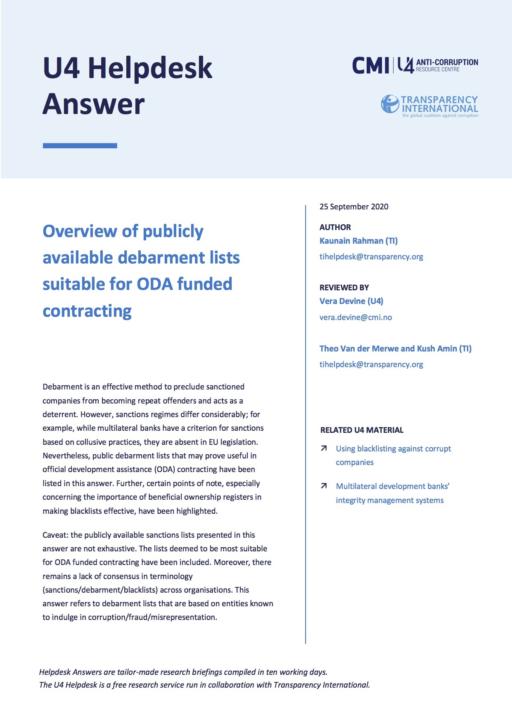