The study “Monitoring the state of corruption in Kazakhstan” was conducted in the summer of 2019 thanks to the financial support of the United Nations Development Program in Kazakhstan. The study is comprehensive and consists of three parts:

The study is applied in nature and is socially oriented. In developing the methodology, an anthropological approach was used. The study has a cumulative nature and consists of a sociological survey of individuals and legal entities, as well as an analysis of complaints received on the Open Government portal «Open Dialogue».

7284 respondents - individuals and 1800 respondents - representatives of small and medium-sized individual entrepreneurship were interviewed by the questioning method. As part of the analysis of big data, out of 15540 appeals, 568 appeals of individuals and legal entities received on the Open Dialogue portal from January 1 to May 31, 2019 were selected and analyzed.

The results of a sociological survey of entrepreneurs showed that 56.6% of respondents believe that over the past year the number of corruption cases in their village has more likely decreased. 17.1%, believes that the number of corruption cases increased more likely, 26.3% found it difficult to assess the changes. The general perception of corruption in the country as a whole is also favorable. 76.1% of respondents agree and rather agree that an entrepreneur can, without giving bribes, develop his business in his place of residence.

The results of the analysis of complaints received on the Open Government portal «Open Dialogue» from January 1 to May 31, 2019 showed that out of 15540 appeals, 568 appeals, or 3.7%, contain information about the applicants' encounter with corruption or poor-quality work of state bodies, red tape , abuse of authority and ethical violations 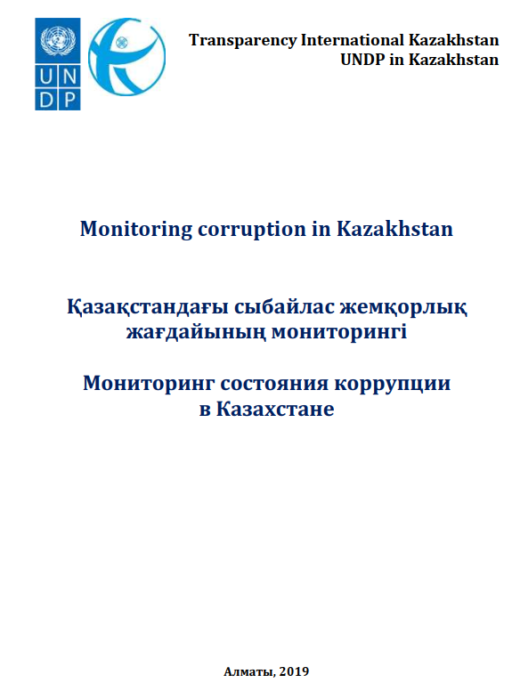