Please provide an overview of corruption and anti-corruption in Afghanistan, including the risks of development assistance fuelling corruption in the country and lessons learned on how to reduce such risks.

Over the past three years, Afghanistan has undergone an important period of transition, with the election of a new government in 2014 and the withdrawal of international forces the same year. Since then, levels of insecurity in the country have seen a marked rise and the number of internally displaced people in the country has doubled. Levels of optimism about the overall direction of the country and confidence in government in 2015 fell to their lowest levels in a decade.

Corruption in Afghanistan is endemic and has penetrated all parts of the Afghan state, adversely affecting the ability of Afghanistan to maintain security for its citizens and deliver basic public services. Corruption is also increasingly embedded in social practices, with patronage politics and bribery becoming an acceptable part of daily life. This continues despite the expressed aim of the National Unity Government (NUG) to address corruption, the establishment of various anti-corruption bodies and President Ghani’s personal involvement in larger procurement processes.

Given the significant changes which have taken place in place in Afghanistan over the past two to three years, particular emphasis has been placed on more recent legal and institutional reforms in the country. For more details on the pre-existing corruption challenges and anti-corruption framework, please refer to the 2013 Overview of Corruption and Anti-Corruption in Afghanistan, which complements this review. 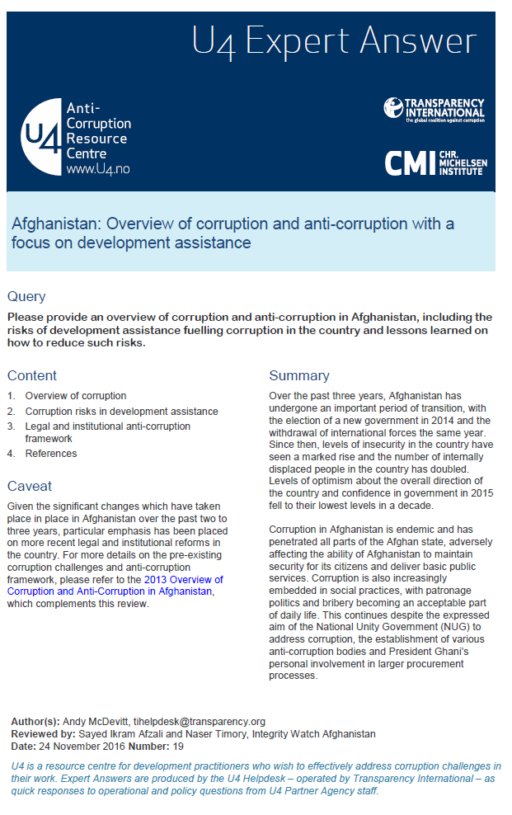