What is the relationship between corruption and marginalisation, and how do marginalised groups experience corruption?

This literature review sets out to examine common experiences of corruption among marginalised groups. It finds that while the role that corruption plays in exacerbating the effects of marginalisation is increasingly well-documented for some disadvantaged groups, notably women and girls, it remains generally understudied and further research is needed. Yet the evidence available does indicate that corruption makes it even more difficult for marginalised groups to access justice and public services or to participate meaningfully in politics and business. As such, corruption can serve as a vehicle for discrimination; it is often the means by which certain groups and individuals are granted or denied access to goods, services and opportunities on the basis of their identity.

The paper also considers the different ways corruption disproportionately affects groups exposed to discrimination, among them women and girls, youth and children, ethnic minorities, indigenous peoples, LGBTI communities, and people with disabilities. While the relationship between corruption and discrimination varies widely by group, depending on the forms of marginalisation that characterise the various communities, what they have in common is an above-average risk of falling victim to corruption due to ingrained power asymmetries.

Some marginalised groups are more likely to encounter coercive attempts to extract bribes and other rent-seeking behaviour due to their restricted access to justice. Other marginalised groups may inhabit regions that expose them to particular risks such as land grabbing. Yet others may find themselves exposed to corruption on the basis of their identity in a manner that seeks either to scapegoat them for poor governance or sow division as a smokescreen for political corruption.

Finally, some people’s experiences of corruption may be aggravated by their compound identities, particularly where such individuals are exposed to multidimensional forms of marginalisation, such as being a non-cisgender member of an ethnic minority group. In addition, historic and current patterns of discrimination that mean marginalised groups typically have lower socio-economic status can further exacerbate the effects of corruption. Those especially exposed to corruption include individuals who experience discrimination on the basis of their identity, status or beliefs, and who also display other characteristics of precarity, such as poverty, occupation in the informal sector or lack of legal identity. 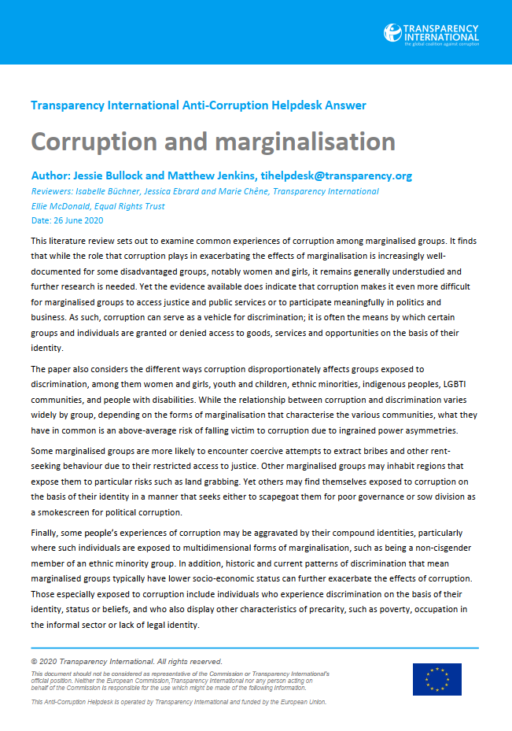 Sources of information on corruption in Rwanda Anti-corruption in the health sector in Southeast Asia Costs of corruption on gender equality, youth development, the environment and security issues in Commonwealth Caribbean countries