Please provide an overview of regional trends from the 2020 Global Corruption Barometer for ASEAN, including country spotlights

The countries of the ASEAN region are among the fastest growing economies in the world, and recent years have seen a significant increase in foreign direct investment and regional integration. However, despite economic growth, sustainable development in the region is hampered by severe governance shortcomings, most notably in the form of autocratic governments, low levels of accountability and highly politicised public sectors. To tackle corruption, many countries have made substantial reforms of their legal frameworks in recent years, as well as an uptick in enforcement action. Results from the 2020 edition of the Global Corruption Barometer (GCB), produced by Transparency International, indicate increasing levels of trust in governments and governmental institutions, as well as in their ability to tackle corruption challenges, and there is a drop of reported levels of bribes paid (with Thailand being a notable outlier). Despite these improvements, gaps remain in the insufficiently resourced and independent anti-corruption agencies, high levels of state capture and a lack of protection for whistleblowers. This Helpdesk Answer looks at regional trends from the GCB, and provides country overviews for Cambodia, Indonesia, Malaysia, Myanmar, Philippines, Thailand and Vietnam.

Caveat: the regional trends analysed in this Helpdesk Answer are based in part on the results of the 2020 GCB, which did not include ASEAN members such as Singapore, Brunei, and Laos. Unless explicit mention is made of these countries to provide comparisons, where regional averages are given based on the GCB, they refer to ASEAN minus Singapore, Brunei and Laos.

2. Corruption challenges in the ASEAN region 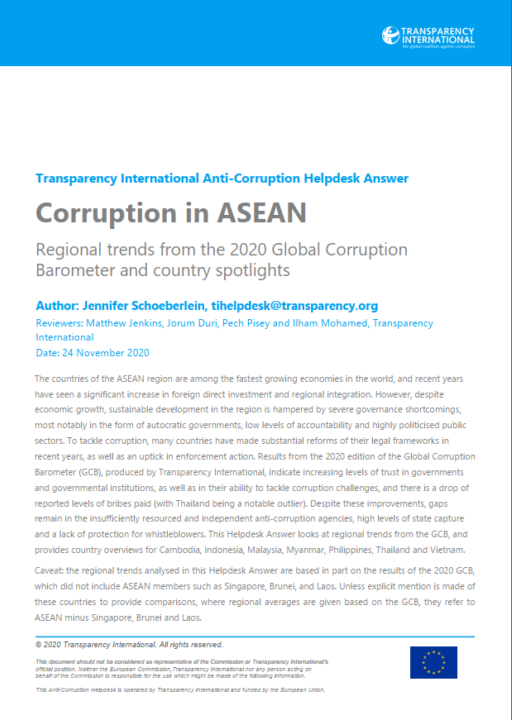