Please provide an overview of corruption and anti-corruption efforts in Mali with a focus on the justice sector, public financial management, social service provision, and climate and the environment.

The areas of enquiry for this country profile focused on a wide range of sectors, including the judiciary, public financial management, socialservice provision, and climate and the environment. Because of the breadth and number of these sectors, the sectoral review provides brief overviews of the topics with supporting sources as starting points for further reference.

The recent political instability in Mali, which culminated in 2013 with the loss of two-thirds of state territory to a regional uprising and Islamistgroups, has exposed long-term structural weaknesses in state governance. The clientelist foundation to Malian politics and employment of state resources to sustain patronage networks gave a false sense of stability despite long-term commitment to a democratic system. The forms of corruption evident in Mali are closely associated with its on-going political and security problems, in
particular, the operations of organised crime and terrorist groups on its territory.

There is limited evidence of progress on anticorruption. While an improved legal framework has recently been put into place, Mali has been slow to establish and operationalise formal anticorruption institutions. This is notwithstanding positive work undertaken by the auditor general’soffice and the potential created by the relative openness of the climate for civil society organisations and the media.

These points are borne out in the sectors covered in this overview. Corruption presents a major challenge in the judiciary, both in terms of the bureaucratic corruption issues, which permeate the system, and insufficient judicial independence to pursue politicised cases. Public financial management has been a focus of international donors and there are areas where Mali had registered improvement; however, the political crisis in 2012 set back reform programmes.

Experience-based survey data shows that corruption incidence is high across the state bureaucracy which affects social service delivery, even if this has only rarely led to repercussions for government officials implicated.

The environment is an area which brings together the themes of corruption, organised crime and state weakness, but the links have been underresearched to date. This review looks at the available evidence on land grabbing, environmental pollution and resource theft. 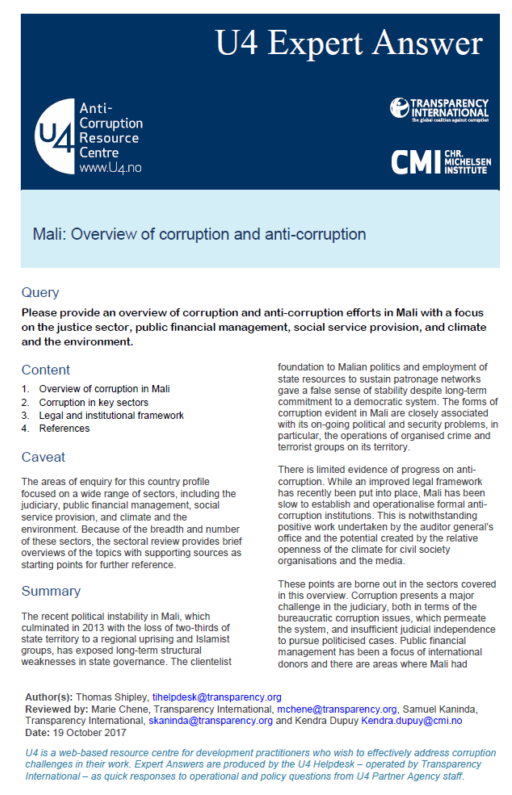 Overview of corruption and anti-corruption in Mali