Please provide an overview or corruption challenges and anti-corruption efforts in Iraq.

Since the fall of Saddam Hussein in a US-led military operation in 2003, Iraq has struggled to build and maintain political stability, safety and the rule of law. Deeply entrenched corruption continues to be a significant problem in the country and a core grievance among citizens. Among the country’s key challenges, and at the root of its struggle with corruption is its consociationalist governance system, known as muhasasa, which many observers contend has cemented sectarianism, nepotism and state capture.

Consecutive governments since 2003 have promised to tackle corruption through economic and political reform. But, as yet, these promises have not been followed by sufficient action. This is partly due to an unwillingness to tackle the systemic nature of corruption, weak institutions ill-equipped to implement reform efforts and strong opposition from vested interests looking to maintain the status quo. As a result, Iraq is left with an inadequate legal framework to fight corruption and with insufficiently equipped and independent anti-corruption institutions.

Trust in government and the political process has been eroded, erupting in ongoing country-wide protests against corruption, inadequate service delivery and high unemployment. This leaves the new government of Prime Minister Kadhimi, who has once more promised to tackle the country’s massive corruption challenges, with a formidable task at hand. 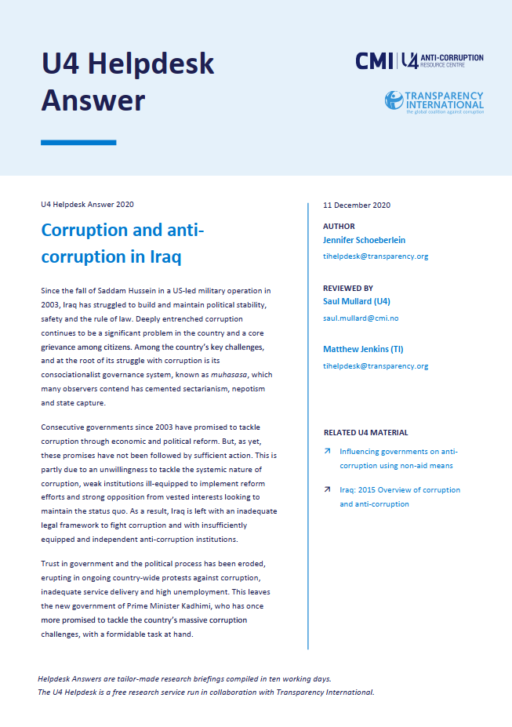