Please provide an overview of corruption and anti-corruption in Qatar.

While petty corruption in Qatar is not a widespread issue, the country has few checks and balances able to exercise oversight over the country’s leadership. Power is heavily concentrated in the emir, and the ruling family has monopolised most important policy areas and posts in the country. At the top, there are few integrity mechanisms to ensure that narrow interests do not drive public policy or exert undue influence over state functions.

In practice, opaque budgeting processes allow state elites free reign to arbitrarily allocate state revenues off the budget, which creates a series of corruption risks. The use of personal, clientelistic networks to obtain rents or contracts from the state is also believed by analysts to be common practice. In addition, despite the fact that Qatar’s wealth affords its citizens a relatively high quality of life, they enjoy only limited civic and political rights.

Where systemic checks and balances in the form of transparent and accountable public institutions are absent, control of corruption is largely dependent on the political will of incumbent leaders. Literature reviews indicate that in environments with restricted civil and political rights such as Qatar, anti-corruption strategies are less sustainable as they are unable to draw on the full range of anti-corruption measures, many of which rely on the participation of non-state actors (Kukutschka 2018). As such, any improvements in reducing corruption in these settings are contingent on the caprice of a few individuals, meaning progress in clamping down on malfeasance is likely to prove fragmentary, short-lived and volatile (Transparency International 2019). 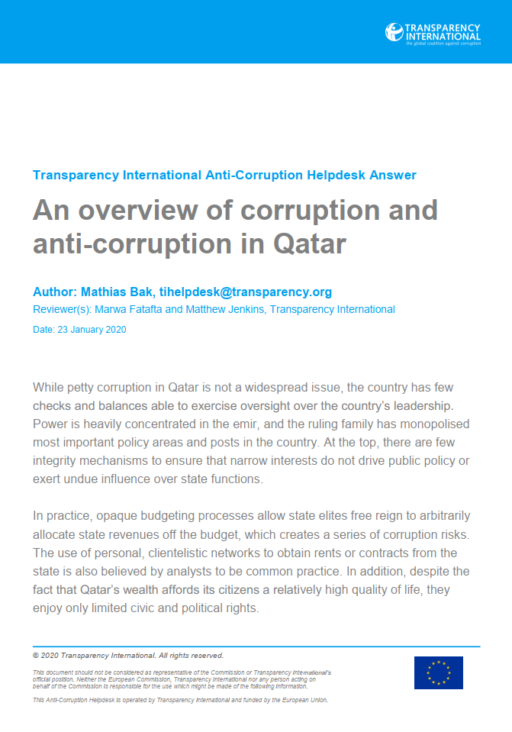