Please provide an overview of the relationship between business integrity and commercial success.

A sizeable and growing body of evidence has provided clear indication that, at the aggregate level, corruption is bad for business. There is a symbiotic relationship between market and firm performance: aggregate growth and firm performance is lower in highly corrupt settings, while markets perform poorly when corporate corruption becomes commonplace compared to markets in which firms typically refrain from corrupt behaviour.

A newer branch of research has sought to examine the costs and benefits of corporate corruption (typically bribery) for individual firms.
Here, the discussion about whether corruption “pays off” is more contested, but the body of evidence demonstrates that, while there may occasionally be some short-term gains, the costs outweigh the benefits in the longer term. Moreover, although some of the more indirect costs may not be captured on a company’s account books, they can have severe implications on the firm’s performance. To give one example, corporate corruption – whether detected or undetected – has a deleterious effect on staff morale which in turn often leads to marked slumps in productivity.

The evidence in terms of the costs and benefits of corporate integrity is somewhat sparser. Nonetheless, synthesis articles (Nichols 2012) find that the weight of evidence suggests that higher levels of integrity are correlated with commercial success in many contexts. Companies with anti-corruption programmes and strong ethical guidelines are found to suffer up to 50% fewer incidents of corruption than those without such programmes, indicating integrity programmes are an effective means of minimising losses which can be incurred as a result of corruption, especially where it is detected (PricewaterhouseCoopers 2007: 33).

Finally, while most studies tend to focus on the advantages of high integrity in terms of costs avoided, there are other forms of “value-added” benefits which accrue to firms that behave with integrity.

The rationale for and consequences of a firm’s decision to engage in bribery depend on a number of factors, including firm size, location, business environment, and market position. Most of the studies on corruption and firm performance relate to large, publicly listed and multinational firms domiciled in OECD countries for which more data tends to be available. This suggests some selection bias in the findings presented here, as small and medium sized enterprises are not the typical unit of analysis, although they are often included in many of the larger, cross-country business survey datasets referred to below.

The literature indicates that in most settings smaller firms have a greater propensity to bribe than larger companies (Pelizzo et al 2016). Svensson (2003) shows that public officials tend to demand fewer bribes from firms with greater bargaining power, of which firm size is a key determinant (Hakkala, Norbäck, and Svaleryd 2008: 638; Aterido and Hallward-Driemeier 2007). At the same time, smaller firms are less likely to have strong internal control mechanisms in place to detect corruption, while some of the effects of corruption as described below (such as the impact on staff morale and business relations) will operate according to different dynamics (Serafeim 2014: 21) 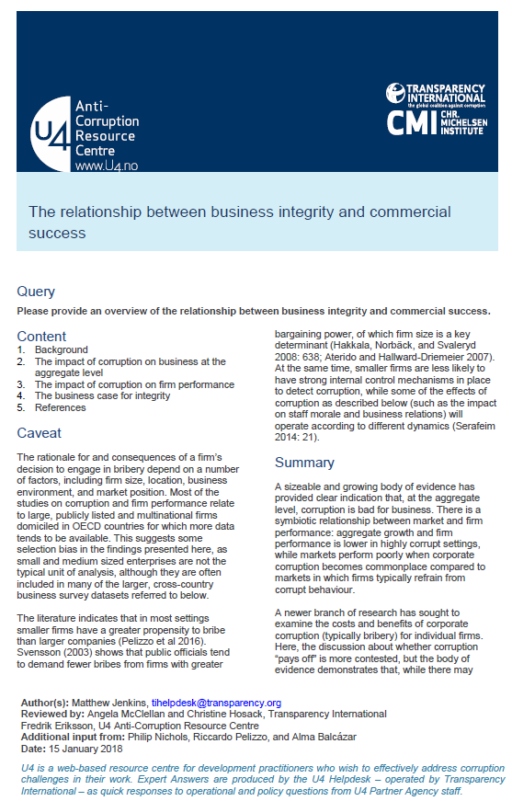 OVERVIEW OF PRINCIPLES FOR MONITORING AND CHALLENGING PUBLIC PROCUREMENT CONTRACTS Examples of integrity agreements for consultants and advisors What can donors do to fight petty corruption in recipient countries?