This Sustainable Development Goals (SDGs) parallel report offers an independent review of the government-led 'National Voluntary Review' (NVR) SDG process in Afghanistan. Produced for the occasion of the United Nations High-Level Political Forum (HLPF) meeting in New York in July 2017, this assessment attempts to provide an objective account of the progress made within the 2030 Agenda for Sustainable Development in Afghanistan.

The report provides independent analysis to complement and scrutinise official government progress reports related to SDG targets that focus directly on corruption. It provides a comprehensive picture of national anti-corruption progress across a range of policy areas. More specifically, targets 16.4 (illicit financial and arms flows), 16.5 (reduce bribery and other forms of corruption) and 16.10 (access to information) are analysed in depth.

The research is based on 175 indicators explicitly developed as part of the global Transparency International project.

The Islamic Republic of Afghanistan’s sustainable development – and ability to achieve its Sustainable Development Goal (SDG) commitments – is continually undermined by the widespread, systemic presence of corruption in the country.

Led by the Ministry of Economy, the Afghan government has developed its SDG implementation plan. The plan will present an Afghanised version of the SDGs – including the Afghanistan Sustainable Development Goals (A-SDGs) targets and indicators – and will pave the way for national alignment of the A-SDGs with Afghanistan’s national policies and budgeting processes. The alignment process was completed by December 2017, with full implementation of the A-SDGs expected to commence in 2018.

However, civil society is concerned that fighting corruption has not been given the attention it deserves in the A-SDG implementation plan. Despite numerous consultations undertaken by the government with non-government entities during the A-SDG drafting process, SDG Goal 16 (which includes corruption) has not been openly discussed in public consultation processes and it is unclear what the A-SDGs targets and indicators concerning corruption will look like. It is also unclear to what extent civil society will be involved in monitoring and reporting against the A-SDG targets and indicators. 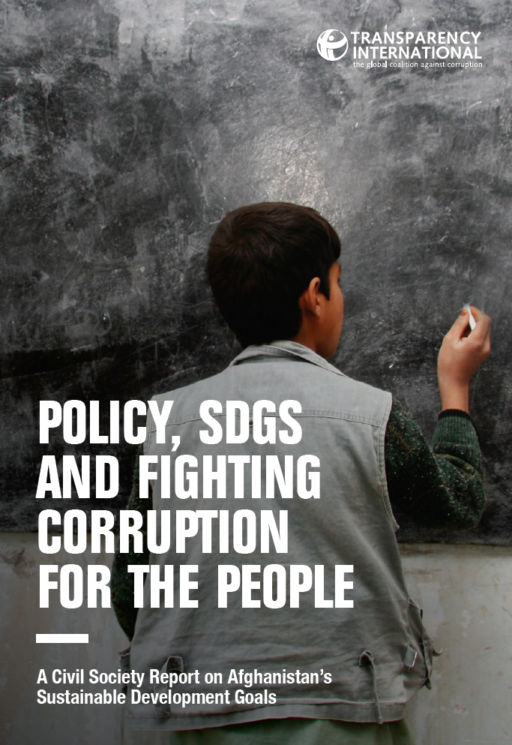