The nature and manifestations of political corruption differs from one country to another. However, in all cases it translates into corruption acts committed

by a specific ruling class and individuals, politicians, leaders of political parties, and members of government (ruling elites), regardless of their political affiliations and or positions. Political corruption is when this “ Elite” group of individuals colludes to:
exploit their position of power to influence decisions, policies, and legislations to their favor whether it is for personal interest, or to support loyalists, obtain illicit gain for personal wealth, enhance personal financial
and social status, or fund election campaigns. It is also when one facilitates obtaining and legalizing bribery in return for granting the use or possession of state land, or for granting contracts, privileges, permits, licenses, or trade agreements. Such actions and behavior transform the public treasury into personal bank accounts for this elite group, including excessive spending on personal recreation activities and smuggling of public funds abroad to bank accounts and or investments.

Methodology for this report was based on examining the state of each country in relations to political
corruption. A set of indicators were defined and agreed upon by the researchers from Palestine, Morocco, Yemen, Egypt, Tunisia, and Lebanon. The indicators were carefully selected to determine the most prominent manifestations of political corruption, their causes, and key areas found. Also examined are practices on the ground by those in charge, in each of the countries involved in the study. Areas examined include: the principle of separation of powers ( state of the executive, legislative, and judicial authorities); integrity of elections; management of public funds and property; state security institutions; monitoring institutions and apparatuses; political parties; civil society (NGOs), the media; (see annex on specific indicators for the report).

The Coalition for Integrity and
Accountability- AMAN- Palestine 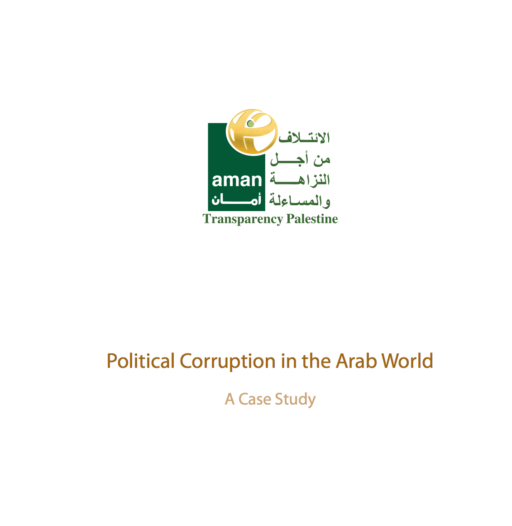