Could you please provide and updated overview of corruption and anti-corruption in Bosnia and Herzegovina?

This Helpdesk answer is an update of a 2014 corruption country profile on Bosnia and Herzegovina.

Corruption presents a comprehensive challenge to Bosnia and Herzegovina (BiH). Its complex legal and regulatory frameworks create
opportunities for corruption. Further, despite political figures and agencies increasingly voicing their concerns over the dangers presented by corruption, there has been limited activity or political will to combat the issue directly.

The European Commission and Group of States against Corruption (GRECO) assessments has repeatedly issued recommendations that BiH do more to curb corruption, a precondition to its accession to the European Union. Recently, steps have been made to strengthen the anti-corruption framework in BiH, including measures aimed at political party financing and anti-money laundering. However, many of these efforts have been declarative only and failed to substantially improve the anti-corruption legislative framework.

Many of the resulting amendments have been viewed as “lost opportunities”. In 2017, GRECO released the Fourth Interim Compliance Report on BiH which concluded that the country’s current level of compliance with GRECO’s recommendations was no longer “globally unsatisfactory”. Despite this revision in level of compliance, corruption remains a significant concern in BiH. 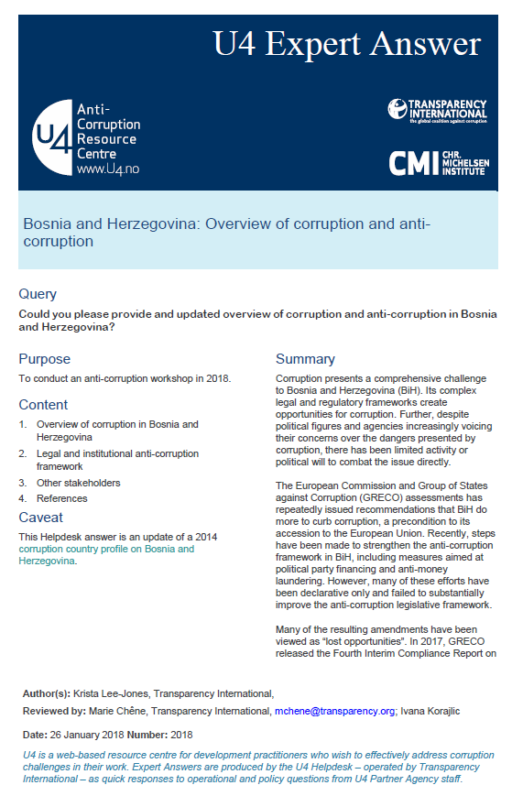