Please provide an overview of the nature of corruption in sub-Saharan Africa, with a particular focus on state capture and fragility, as well as the anti-corruption activities of relevant regional organisations

Sub-Saharan Africa is vast region with a combined population of over 1 billion people. Consequently, attempting to extrapolate governance trends from such a diverse group of states is somewhat problematic, and care should be taken to avoid unhelpful generalisations.

What is evident is that many countries in sub-Saharan Africa are making considerable progress towards the vision of a democratic, prosperous and peaceful continent outlined in the African Union’s Agenda 2063. However, in a large number of these states, such gains are threatened by high levels of corruption that have deleterious effects on social, economic and political development. Alongside the problem of petty bribery, which is extensive in some parts of the region, the interrelated phenomena of fragility, crony capitalism and poor governance in certain countries have also resulted in particularly egregious forms of corruption, notably state capture.

In response to these challenges, countries have enacted various anti-corruption instruments at regional and national level. The African Union designated 2018 as the anti-corruption year in Africa to review member states’ anti-corruption progress and to chart the way forward. While in some countries the drivers of corruption are deeply embedded in local political economies, there are regional organisations, civil society groups and media outlets across the continent dedicated to tackling corruption head-on.

1. Overview of corruption in sub-Saharan Africa 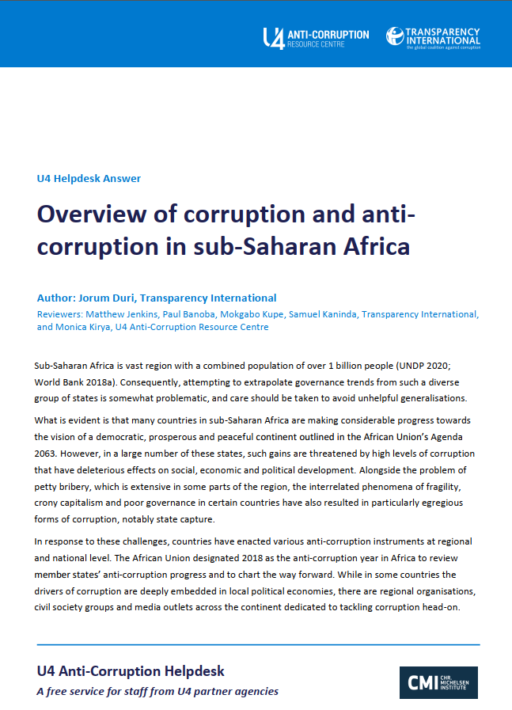