Provide an overview of practices whereby a part of the state budget can be distributed by the parliament to organisations, public or private, according to their own wishes (usually to their regional constituents)?

The evidence from the literature surveyed strongly suggests that discretionary spending (known by various terms in differing contexts, such as pork-barrel spending and earmarked funds), whether it is wielded by legislative or executive branches, tends to be used for political rather than welfare-optimising causes. Discretionary funding schemes strengthen the chances of (re)election for those politicians who have access to such schemes while reducing the election chances of their opponents, thus skewing the overall political arena in a manner that does not strengthen democratic norms.

However, case evidence also suggests that banning practices, such as earmarking, did not do away with the practice of discretionary spending practices such as earmarks. Where legislative discretionary spending schemes have been subject to a ban or court order designating it as illegal or unconstitutional, legislators have simply found novel and more indirect ways of channelling money to their constituencies. Moreover, there is no evidence to suggest that pork-barrel spending in countries where the legislative branch is not able to wield discretionary spending is less of a problem. In countries where the legislature has the ability to fund their constituencies, the spoils of pork-barrel spending may reach a larger proportion of the population – not least constituencies in areas controlled by the opposition.

2. Discretionary spending in the form of earmarks and Constituency Development Funds (CDFs) 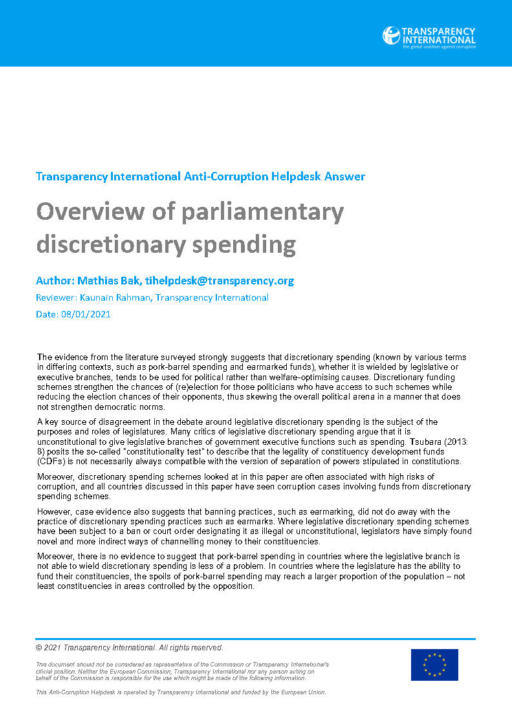