Please provide an overview of corruption and anti-corruption efforts in Somalia.

After the complete collapse of state institutions in 1991, Somalia represents one of the world’s most protracted cases of statelessness (Bertelsmann Stiftung 2016). The on-going civil war, tensions between traditional clans and recurring famine ensure that the prospects for political stability remain bleak.

Corruption is both one of the leading causes and consequences of endemic political instability in Somalia, which has been ranked bottom of Transparency International’s Corruption Perceptions Index every year since 2006. Corruption occurs at all levels in both the public and private sectors, and is a visible and expected form of behaviour. It affects virtually every aspect of the Somali society: from public officials’ misuse of public goods for private gain and the solicitation of bribes in exchange for basic services to the clan-based patronage networks used to obtain employment and political appointments. Businesses have likewise adjusted to the climate of lawlessness, for instance, by avoiding taxes and selling expired food and drugs (Marqaati 2017a; Legacy Centre for Peace and Transparency 2016).

Despite a comparatively peaceful transition of power to a newly elected president in early 2017, there are as yet few signs of comprehensive anti-corruption reform. The country’s institutions continue to be extremely dysfunctional, and there are limited integrity mechanisms in place to curb corruption; among other things, the National Anti-Corruption Commission foreseen in the constitution has yet to be established (GAN Integrity 2016; Marqaati 2017a). 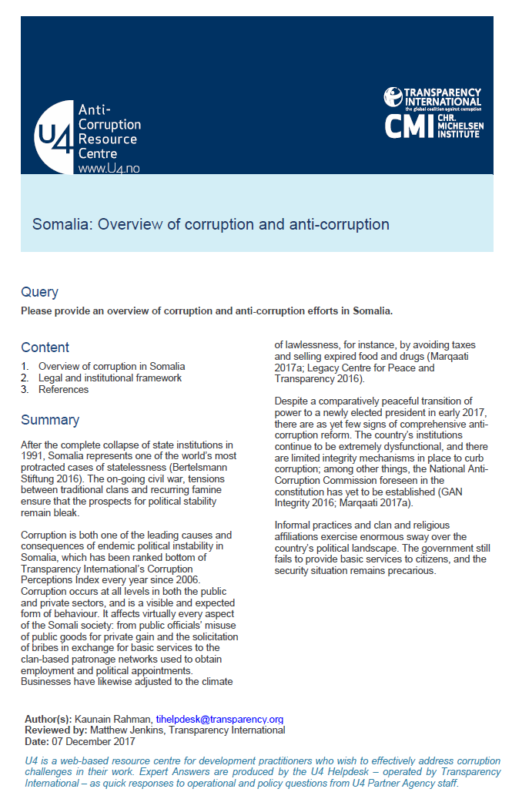