Please provide an overview of existing literature, examples, and experiences on how LGBTIQ+ people are especially affected by corruption. Which risks can they face when they engage in projects and advocacy on LGBTIQ+ and corruption, and what does that mean for the international donor community and particularly, for designers of anti-corruption projects?

Corruption and discrimination exacerbate each other. Laws, policies, and practices that discriminate on the basis of sexual orientation, gender identity and expression and sex characteristics leave LGBTQI+ individuals more exposed to coercive corruption. They provide public officials, especially police officers, with an opportunity to extract (illicit) revenue from these individuals.

Anti-corruption activists and LGBTQI+ rights defenders are some of the most at-risk human rights defenders (HRDs) in the world. Individuals and organisations working on the intersection of those issues can expect to encounter risks that both sets of HRDs face.

Including an LGBTQI+ perspective into anti-corruption programmes requires that two fundamental principles are followed: ‘nothing for us without us’ and ‘do no harm’. An intersectional approach is also necessary to promote substantive equality. There is a need for projects designed to understand more clearly and to articulate the impacts of corruption on LGBTQI+ rights and to propose measures to address discriminatory corruption. 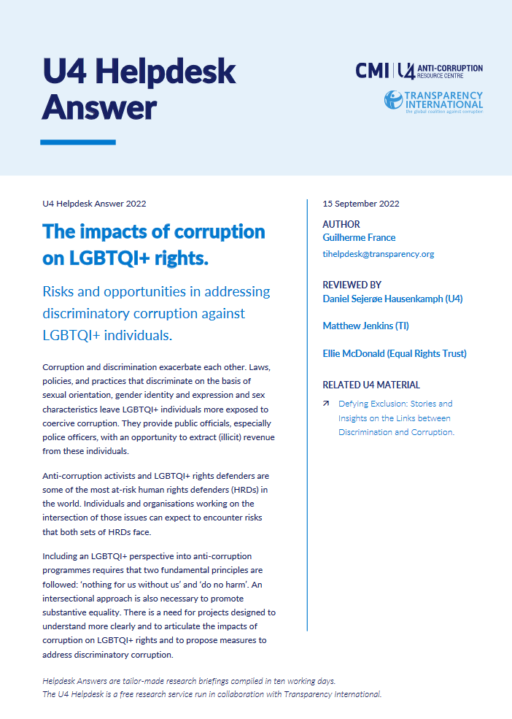