Computer algorithms are being deployed in ever more areas of our economic, political and social lives. The decisions these algorithms make have profound effects in sectors such as healthcare, education, employment, and banking. Their application in the anti-corruption field is also becoming increasingly evident, notably in the domain of anti-money laundering.

The expansion of algorithms into public decision making processes calls for a concomitant focus on the potential challenges and pitfalls associated with the development and use of algorithms, notably the concerns around potential bias. This issue is made all the more urgent by the accumulating evidence that algorithmic systems can produce outputs that are flawed or discriminatory in nature. The two main sources of bias that can distort the accuracy of algorithms are the developers themselves and the input data with which the algorithms are provided.

Equally troublingly, the analytical processes that algorithms rely on to produce their outputs are often too complex and opaque for humans to comprehend, which can make it extremely difficult to detect erroneous outputs. The Association for Computing Machinery (2017) points to three potential causes of opacity in algorithmic decision making processes. First, there are technical factors that can mean that the algorithm’s outcomes may not lend themselves to human explanation, a problem particularly acute in machine-learning systems that can resemble a “black box.” Second, economic factors such as commercial secrets and other costs associated with disclosing information can inhibit algorithmic transparency. Finally, socio-political challenges, such as data privacy legislation may complicate efforts to disclose information, particularly with regards to the training data used.

This paper considers these challenges to algorithmic transparency, and seeks to shed some light on what could constitute meaningful transparency in these circumstances, as well as how this can be used to leverage effective accountability in realm of algorithmic decision-making.

Given the potential for automated decision-making to result in discriminatory outcomes, the use of algorithms in public administration needs to come with certain standards. What these safeguards look like will vary in different contexts, but should be built into each stage of adopting algorithmic systems: from design, through the building and testing phases through to implementation (see Center for Democracy and Technology 2017).

Ultimately, institutions that use algorithms as part of automated decision making processes need to be held to the same standards as institutions in which humans make these decisions. Developers must ensure that the algorithmic systems they design are able to comply with the demands of impartial and accountable administration, such as accountability, redress and auditability.

The paper briefly reflects on ways in which algorithms can (re)produce opportunities for the abuse of entrusted power, including corruption, but does not analyse in detail the topic of potentially “corrupt” algorithms – that is algorithms developed with the specific aim of achieving fraudulent outcome. Neither does this paper seek to address the potential application of artificial intelligence and machine learning as anti-corruption tools, a matter that has been studied elsewhere (Adam and Fazekas 2018).

The OECD (2019a) identifies a number of opportunities and challenges in relation to the use of artificial intelligence (AI) and algorithms in the realm of good governance and anti-corruption work. 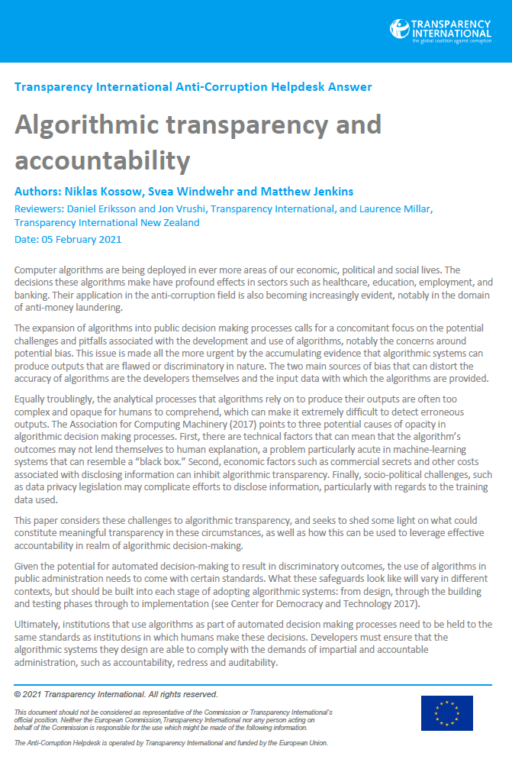 Key features of NGO accountability systems Literature review: The use of ICTs in the fight against corruption Exploring the Relationships between Corruption and Tax Revenue