After their initial implementation in Asia in the 1950s, anti-corruption agencies (ACAs) have been adopted by many countries as key pillars of their national anti-corruption framework. Following an initial concentration in the developing world, often at the encouragement of international organisations and donors, they have also become more common in Europe since the 1990s. Despite this growth in popularity and visibility, evidence of their impact is mixed, with a number of evaluations of their performance being rather sobering.

Such comparative assessments are complicated by a dearth of indicators and common reference frameworks. In addition, there is a continued lack of clarity in terms of what exactly constitutes an ACA as ACAs today include a wide variety of agencies with very different mandates, rendering comparisons even more challenging. Nonetheless, in light of the continued faith placed in ACAs to curb corruption, it is instructive to consider the evidence in terms of what an ACA can be reasonably expected to accomplish, under which circumstances, and which type of ACA works best in a given context.

In Europe, the number of ACAs increased substantially when countries in (south) eastern Europe started establishing anti-corruption institutions as part of their political transition and EU accession. With few exceptions, western European countries have mostly opted to strengthen and specialise their existing law enforcement agencies rather than build new institutions, resulting in the predominance of a very different type of ACA.

This Helpdesk Answer gives an overview of the different types of agencies established, and of the factors contributing to their success. It then provides a typology of ACAs across Europe, and covers case studies from France, Latvia, Italy, Ukraine and the UK. 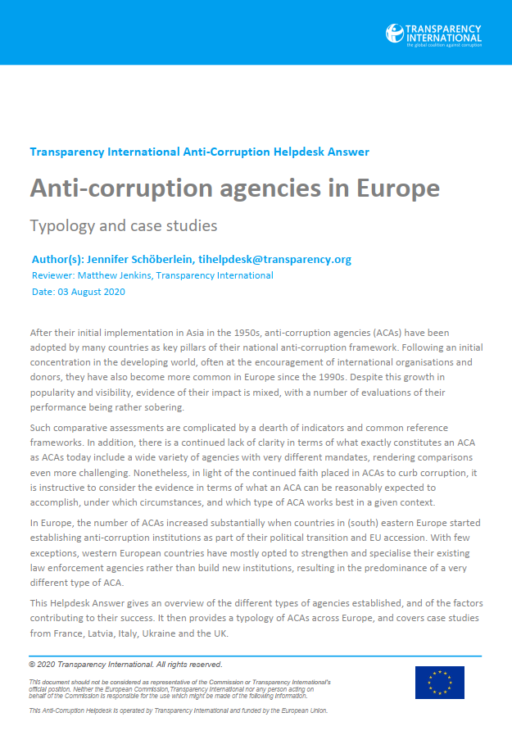