What examples are there of anti-corruption, transparency or related provisions being included in trade agreements, and how successful have they been?

Despite being built on the underlying principles of transparency and non-discrimination, the global trade system overseen by the WTO regime has limited purview over so-called “deep provisions” in trade agreements, such as governance issues.

In the absence of measures at WTO level to improve transparency and reduce bribery in international trade, the U.S. has pioneered the approach of embedding anti-corruption and transparency provisions into its bilateral trade agreements over the last 15 years.

There is now some consensus around best practice anti-corruption and transparency provisions for inclusion in trade deals, such as explicit references to international anti-corruption conventions, commitments to criminalise active and passive bribery, non-criminal sanctions for firms where they are not subject to criminal liability, and whistleblower protection.

Nonetheless, evidence suggests that there is a strong business case for the inclusion of anti-corruption and transparency provisions in trade agreements. Moreover, recent scholarship even contends that of all the instruments available to external actors to curb corruption in their development and trading partners, free trade agreements may be one of the most effective (Mungiu-Pippidi et al 2018). 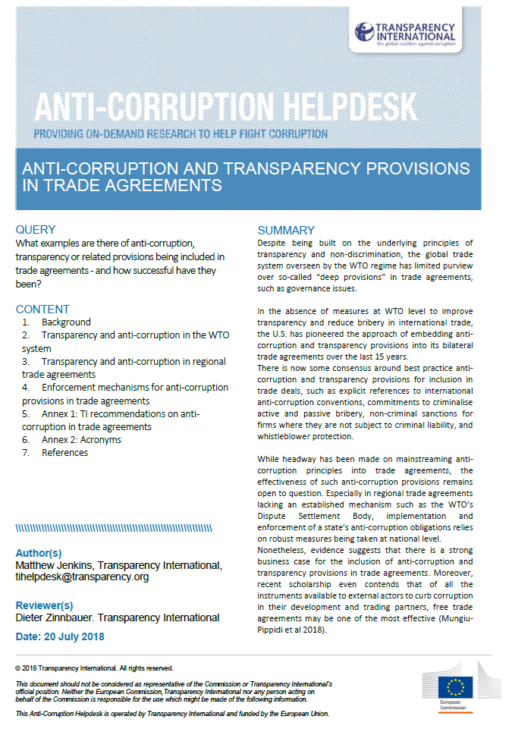 Overview of corruption in the Colombian fisheries and aquaculture sector Overview of oversight mechanisms of parliamentary budgets in Europe Mongolia: Overview of Corruption and Anti-Corruption

What can donors do to fight petty corruption in recipient countries? L’impact des paiements de facilitation Code of ethics for companies: Good practices and resources