Please provide good practices for mitigating corruption risks in the negotiation and handing out of leases and concessions for natural resource exploitation in various sectors, such as mining, oil and gas, and potentially agriculture.

The awarding of leases and concessions is the process by which a government provides a private company with the rights to use land and exploit natural resources – whether for mining, logging, agribusiness or other land use. This process presents one of the most significant corruption risk areas in the governance of natural resources.

A lack of transparency throughout the stages of the contracting process - from planning, to allocation and award, to the terms and implementation of a contract - allow space for corruption to occur. Companies may employ bribery or wield their political connections to secure preferential treatment in the negotiation of a contract (Lindner, 2014). The details of contractual arrangements for companies to exploit natural resources are often not disclosed, and when they are, their complexity can make public scrutiny and accountability difficult to achieve (World Bank 2007). The terms of natural resource contracts can be exposed to corruption; in determining the area of exploitation, the cost recovery basis, the share of the profits, the length of operation, rate of production, environment concerns, end-phase commitments, as well as reporting and control commitments (Kolstad et al. 2008). As a result, countries may negotiate poor terms with companies, to the benefit of private interests and the enrichment of public officials and at the expense of socioenvironmental rights of the local population. The concept of the “resource curse” experienced by many resource-rich countries in the global South derives from the frequent failure of resource wealth to translate into material benefits for local populations (Chene, 2014).

This helpdesk answer presents good practices for mitigating the significant risks of corruption in the negotiation and awarding of leases and concessions. It is important to note that exact legal definitions of leases and concessions vary between jurisdictions, and that there are significant differences in the processes for allocation between sectors – whether for mining, oil and gas, or large-scale land-based investments such as agriculture or forestry. This study draws from literature exploring corruption risks in these diverse sectors. In line with the literature, “good” rather than “best” practices are highlighted, as the significant variations between sectors and legal frameworks in different countries makes any ranking of practices difficult. This answer provides an overview of general principles and examples of good practice from the mining, oil and gas sectors and large-scale land investments, however any assessment of the transferability of these good practices between sectors or jurisdictions is outside the scope of this study. 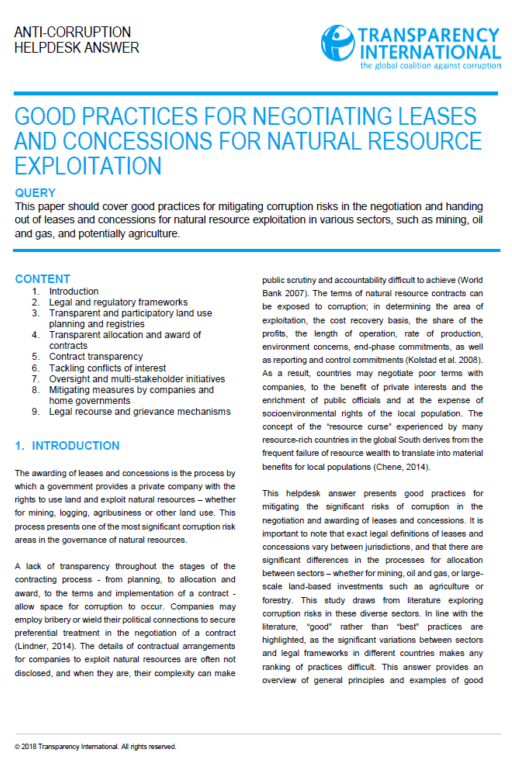