Please provide an overview of corruption and anti-corruption efforts in Moldova with a focus on the healthcare and procurement sectors.

The Republic of Moldova, a landlocked country in South East Europe, gained its independence with the fall of the Soviet Union in 1991. Its troubled transition to democracy and a market economy has been accompanied by political tension between pro-Western and pro-Russian factions, as well as a dependency on remittances. All this has created a conducive environment for corrupt practices to thrive (Chayes 2016).

Surveys and anecdotal evidence suggest that corruption in the country appears to be becoming more engrained in politics and society, affecting the quality of life for ordinary Moldovans. In particular, the consolidation of an oligarchic elite’s position at the reins of the state apparatus is seen to have fuelled corruption in politics, business and public administration. An example of the country’s problem with grand corruption was provided by the 2014 banking scandal, which led to the imprisonment of the former prime minister and precipitated an economic crisis.

While substantive legislative reforms have been undertaken, serious political commitment to their implementation is required to tackle the endemic forms of corruption that exist in various sectors – including healthcare, procurement, judiciary and law enforcement. This paper also considers the role of external partners in Moldova’s anticorruption efforts. 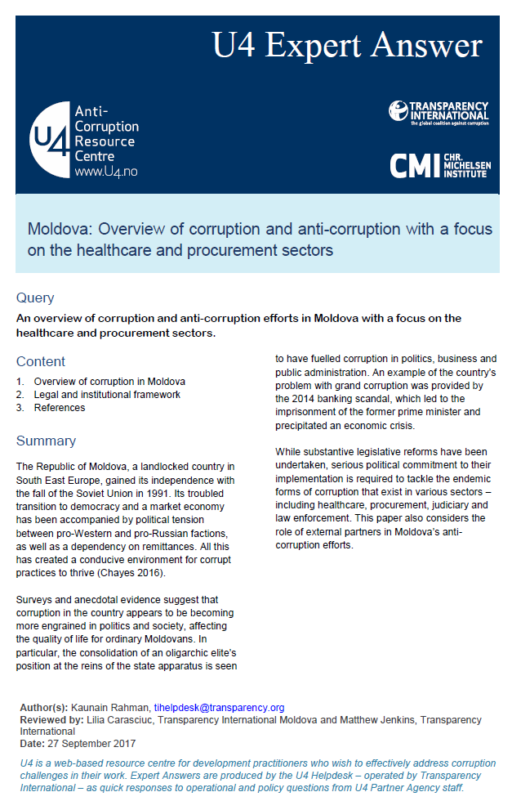 Corruption trends in selected Asian countries The linkages between corruption and violations of competition laws Serbia: overview of political corruption