We would like an update of the overview on corruption and anti-corruption in Sudan. In particular, we would be interested in the role and results of the Anti-Corruption and Funds Recovery Committee and the overall role of state/military-owned companies in the transition process in Sudan.

The transition of Sudan to democratic rule after the 2019 overthrow of the al-Bashir regime has been characterised by its own set of challenges, including, but not limited to, a failing economy; political tensions; and continuing widespread protests for justice and reforms. The ongoing Covid-19 pandemic has exacerbated existing issues, leading to record high inflation rates; increased food prices; rising unemployment, and declining exports. While the Empowerment Elimination, Anti-Corruption and Funds Recovery Committee has made substantial progress in recovering assets from the erstwhile kleptocratic regime’s key actors, much needs to be done to strengthen the overall anti-corruption legal and institutional framework as well as its implementation. Military-owned businesses have tight control over critical sectors of the Sudanese economy. Civic space is slowly opening, but a culture of transparency has to be created and sustained after three decades of authoritarian rule. 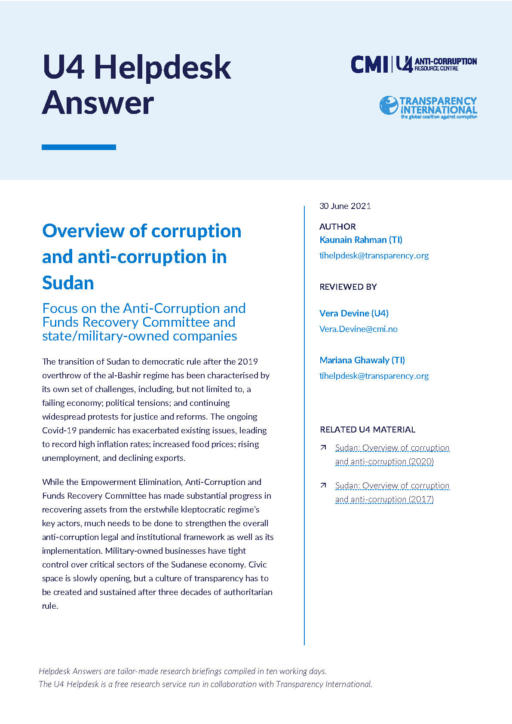