The Middle East and North Africa region has witnessed substantial upheaval in recent years that has affected many countries’ capacity to effectively curb corruption.

As the results of the 2019 Global Corruption Barometer illustrate, substantial governance challenges persist across the region. Political corruption and nepotism remain an issue and perceived levels of corruption continue to rise. Trust in governments and their ability to tackle corruption remains low, and while many citizens continue to believe that ordinary people can make a difference in anti-corruption efforts, their numbers are shrinking.

While the overall outlook appears grim, a granular appraisal of the region belies a monolithic picture. At one end of the spectrum, reform approaches in Jordan have managed to keep levels of bribery down and trust in government comparatively high. At the other end, the situation in Lebanon has deteriorated and the country now has the highest rate of reported bribes paid to access public services in the region. In Sudan, the situation appeared particularly dire, but with the recent ouster of long-term dictator al-Bashir, new space for reform may open up. Morocco and Tunisia continue to present mixed pictures with substantial reform efforts but also considerable challenges. Moreover, while recent elections in Tunisia underlined the absence of trust in the country’s established political class, in another sense those elections reflect a sustained effort to consolidate the most successful democratic transition in the wake of the Arab Spring. 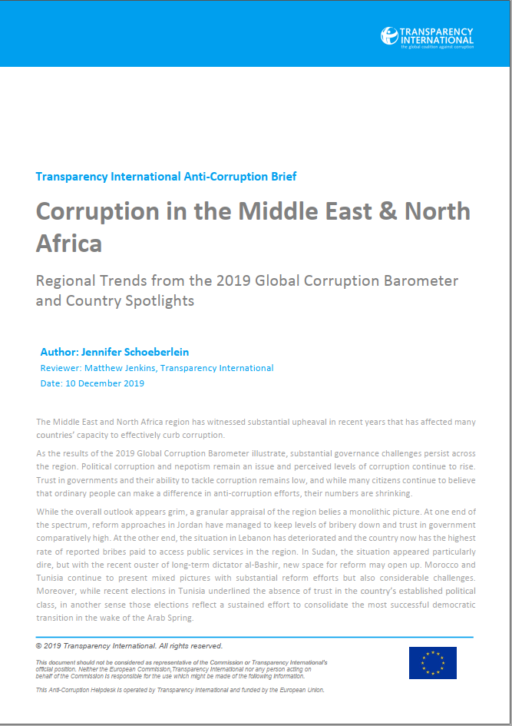