When President Adama Barrow came into power in 2017, there was renewed hope for good governance in the Gambia. Though the new government is off to an encouraging start, it is yet to deliver on many of its promises on good governance. Notable reforms include increased judicial independence, and the establishment of transitional justice mechanisms, such as the Truth, Reconciliation and Reparations Commission as well as the Janneh Commission that investigated financial crimes committed by the former president Yahya Jammeh and his allies. The National Assembly recently passed the Access to Information Bill and has long drafted an anti-corruption bill but also rejected the draft Constitution in 2020. Civic space has also expanded since 2017, but there are signs of democratic backsliding. In some circumstances, activists have been met with relatively heavy-handed responses, and journalists have been mistreated.

a. Judiciary and the rule of law

— The Gambia has a score of 37 out of 100 on Transparency International’s 2020 Corruption Perceptions Index, which is a significant improvement from 2016 when it scored 26 out of 100 .

— The National Assembly recently passed the Access to Information bill, which is an important step towards more transparency in government. However, the National Assembly has not passed many other institutional and legal reforms required for political transformation, leaving the Gambia with a weak anti-corruption framework.

— Civic space has expanded since the change in government in 2017. However, civil liberties are yet to be fully consolidated and signs of democratic backsliding have begun to surface. 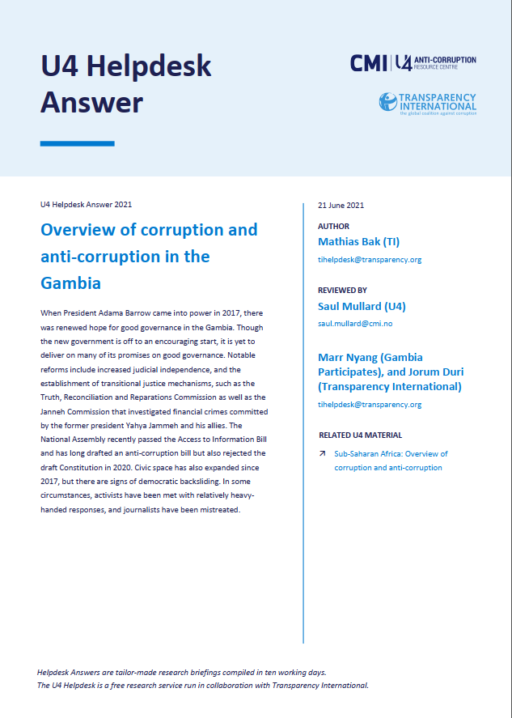