Please provide information and data on the relationship between corruption and human rights in Ecuador, as well as the existing links between gender and corruption in the country

Corruption remains a huge challenge in Ecuador, as evidenced by the country’s poor performance on various governance indicators such as the Corruption Perceptions Index and the Worldwide Governance Indicators. Though there is very little information on gender and corruption in Ecuador, there are some indications that corruption affects women in rural areas. In one study from 2017, 57% of rural women surveyed stated that they had experienced extortion from public officials and that many were denied services if they refused to comply with demands for bribes.

Evidence also shows that corruption in the country hinders the ability of the state to fulfil its obligations in terms of citizens’ social, economic and cultural rights such as the rights to health, an adequate standard of living and the rights of indigenous communities. In addition, it also hinders the full enjoyment, respect and protection of civil and political rights, such as the right to a fair trial and right to security of the person.

— On Transparency International’s Corruption Perceptions Index 2019, Ecuador scored 38 of out 100, giving it a rank of 93 out of 180 countries. About 56% of respondents in Latinobarometer perceived that the level of corruption in Ecuador increased in 2018.

— According to a 2017 study on 308 rural women in Ecuador, about 57% of the respondents said they had experienced extortion from public officials and teachers.

— There is some evidence of corruption in COVID-related procurement processes, notably one case in which medical products were bought for US$615,000 instead of the standard price of US$46,910. In addition, some relief food kits were purchased at US$150 each when the market value was less than US$85. In both cases, corruption hindered the government’s ability to fulfil citizens’ rights to health and food respectively.

— Political interference in the judiciary has compromised the right to a fair trial, and corruption in the country’s security forces facilitates a growth drug trafficking, which greatly affects the right to security of the person due to increased crime. 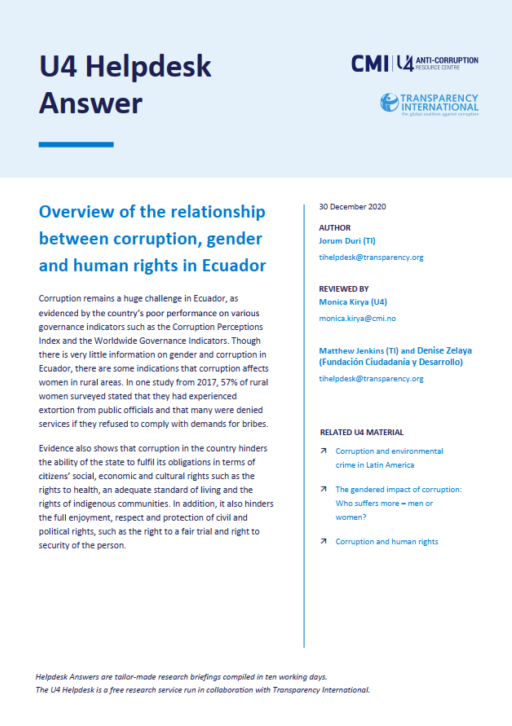