Please provide an overview of the most important economic, political and social developments in Azerbaijan over the past several years.

This answer builds on a previous Helpdesk Answer available here.

As with many authoritarian regimes, Azerbaijan is characterised by the large concentration of power in the hands of the ruling elite, which blurs the line between business and politics. The ruling family has extended its reach into virtually all lucrative sectors of the economy and patronage networks permeate all spheres of public life and hamper the long-term economic and social development prospects of the country.

Oil and gas revenues sustained the regime for many years, contributed to impressive levels of economic growth, expanded the government’s room for manoeuvre in both foreign and domestic policy and helped preserve stability in the country. The revenues allowed the government to stage prestige events such as the Eurovision Song Contest and the European Games, Formula 1, Islamic Solidarity Games and to carry out large-scale construction projects.

As the hydrocarbon revenues level off and are set to decline, the space for dissenting views in politics is also closing rapidly: harassment, intimidation and unjustified arrests have become commonplace among members of opposition parties, the media and civil society.

In February 2017, President Aliyev appointed his wife, Mehriban Aliyeva, to the newly created position of first vice president, placing her first in line to take over the presidency. This unprecedented degree of nepotism reduced any future chance for free and independent elections, and further entrenched power within the ruling clan. 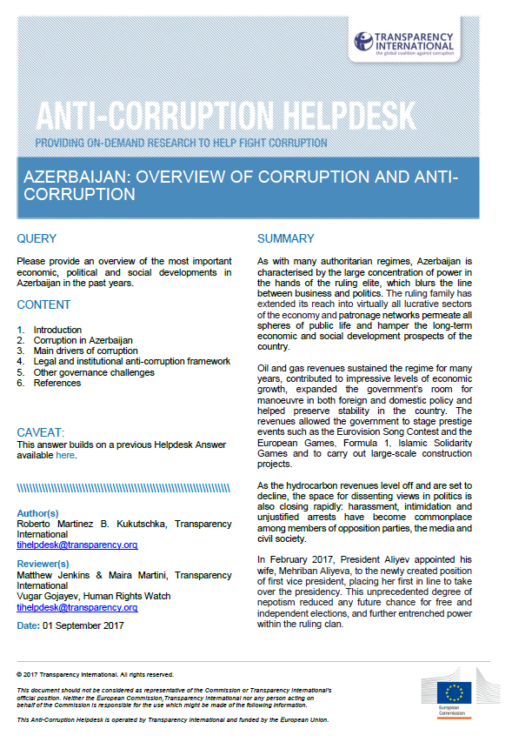