Please provide an overview of corruption and anti‑corruption initiatives in Bhutan, with a specific focus on: i) renewable natural resources and climate change; ii) local governance and fiscal decentralisation; iii) trade; and iv) civil society.

The Kingdom of Bhutan is landlocked country, nestled in the Eastern Himalayas and surrounded by its powerful neighbours, India and China. The country is widely known for its unorthodox and unique development philosophy of gross national happiness (GNH), which is focused on the objectives of broad-based sustainable growth, quality of life, conservation of the natural environment, preservation of culture and strengthening good governance.

Although there are cases of corruption, including conversion of government land into private property and unlawful distribution of land by ministers, the government has made substantial efforts to control it, and the country fares significantly better than the regional average.

Hydropower is the leading renewable natural resource, and its export, mainly to India, makes up one-fifth of the Bhutanese GDP. Bhutan still relies on India for defence and many foreign policy matters. Despite being a carbon negative country, it is affected by climate change.

Local governance and fiscal decentralisation have encountered some initial challenges since the democratic transition in 2008. 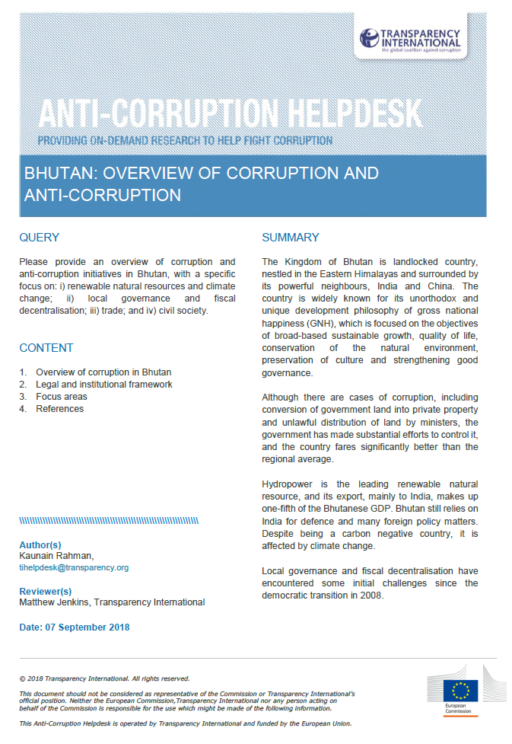