Please provide an overview of corruption and anti-corruption efforts in Guinea-Bissau, with a particular focus on the agricultural and health sectors.

This is an update of a previous Helpdesk answer from 2014 on corruption and anti-corruption in Guinea-Bissau.

Guinea-Bissau, one of the poorest countries on earth, is characterised by a long history of political instability. Death, coups and civil war have interrupted the mandate of every elected president in the 40 years since the country’s independence. Following the 2012 coup, the 2014 elections were seen as an end to this pattern of crises. However, President Vaz’s decision to sack Prime Minister Pereira in 2015 plunged the country into deadlock yet again. At this time, parliament has not convened in over a year, and recent tensions have culminated in ECOWAS threatening to impose targeted sanctions if the terms of a power-sharing accord are not respected.

Corruption, government opacity, and a lack of public accountability are major problems in Guinea-Bissau, problems compounded by the country’s position as a major African hub for drug trafficking. Organised criminal networks involved in illicit trade are widely believed to have permeated all levels of the state apparatus.

The country’s legal and institutional anti-corruption frameworks remain inadequate, and despite some attempts at reform, anti-corruption efforts rarely go beyond lip service. 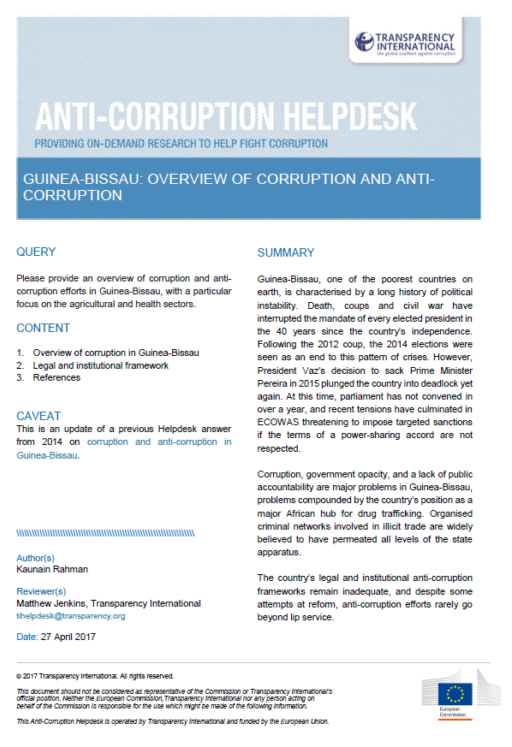 THE EFFECTIVENESS OF CODES OF CONDUCT FOR PARLIAMENTARIANS Influence of interest groups on policy-making Fighting grand corruption: Challenges and successes