What are the methods of influencing governments in anti-corruption strategies using non-aid means (e.g. diplomatic, reputational, economic)? Where has the influence been effective, and what lessons have been learned about the effective methods?

The literature on the means used to influence governments to undertake anti-corruption reforms is scarce. This answer draws on reports and studies targeted at broader governance reforms, sanctioning human rights abuses or supporting democratisation processes.

There are various ways to influence governments to advance anti-corruption and governance reforms using non-aid means that have been used in the past with varying degrees of success. In recent years, the international community has moved beyond classical tools such as aid conditionality to include positive and negative measures across different policy areas, including trade, security, climate, energy and foreign policy. These tools typically take the form of economic sanctions or benefits applied to these policy areas to incentivise the desired policy change. There is an emerging trend of using approaches targeted at selected sectors or high-profile individuals instead of country-based programmes to avoid causing collateral damage to ordinary citizens.

Due to the transnational nature of corruption, donor countries can also lead by example by ensuring that strong anti-corruption safeguards and policies are in place and by providing leadership in the fight against corruption through the application of global anti-corruption instruments at home. Combatting money laundering, closing the legal loopholes that facilitate tax evasion and illicit financial flows from developing countries, and facilitating the recovery and repatriation of assets lost due to corruption are also tools with significant potential to help curb corruption abroad.

International instruments and mechanisms can also be used to advance the global anti-corruption agenda by incentivising recipient countries to ratify international conventions or take part in international initiative such as the Extractive Industries Transparency Initiative (EITI) and the Open Government Partnership (OGP) that have been successful in setting global norms of transparency. In a global, interdependent world, reputation can also be a powerful resource to motivate political actors to care for the fight against corruption through the publication of country rankings according to their performance in anti-corruption or through international shaming campaigns. 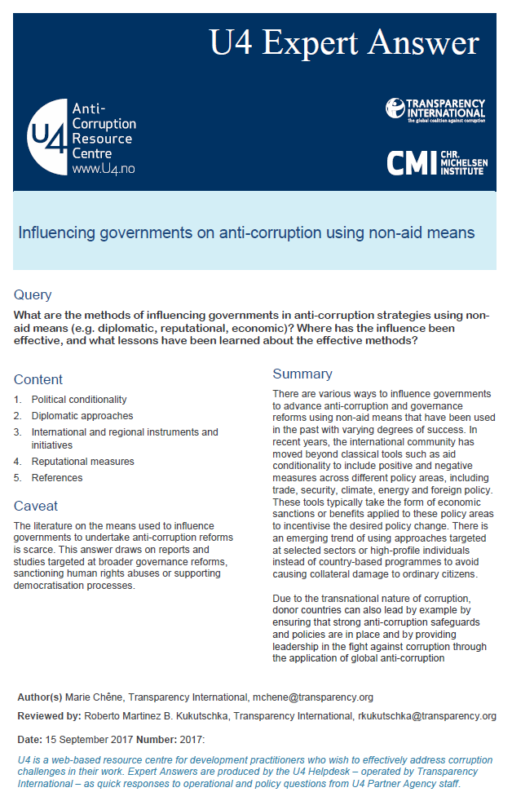