Please provide an overview of the most pressing integrity risks affecting international businesses operating in Mexico.

Mexico is one of the most open economies in the world and has been characterised by sustained - albeit slow - economic growth, low levels of inflation and high levels of macroeconomic stability. Over the past decade, the country has also managed to transform its economy, decrease its oil dependency and develop its manufacturing capacity. The country’s geographic location, competitive production costs, sizeable domestic market and highly skilled young workforce make the country an attractive destination for international investors.

Between 2012 and 2018, the Mexican government undertook a number of reforms that have helped to foster competition in a number of sectors, notably in the oil industry and the telecommunications sector, each of which had previously been dominated by a single player. The country ranks ahead of most other Latin American countries and emerging economies in terms of ease of doing business, though levels of foreign direct investment are comparatively low (2.6% of GDP). Sectors of interest to foreign investors include the automotive, aerospace, telecommunications, financial services and electronics sectors, based predominantly in central and northern Mexico.

Despite these positive trends and developments, the country faces significant institutional and governance challenges that have made the effective enforcement of the relatively strong legal and institutional anti-corruption framework impossible. Corruption is perceived by citizens and businesses alike as one of the main challenges in the country, and its effects have further aggravated the crisis in the judicial system, the failings of the police force and the wave of violence linked to organised crime. 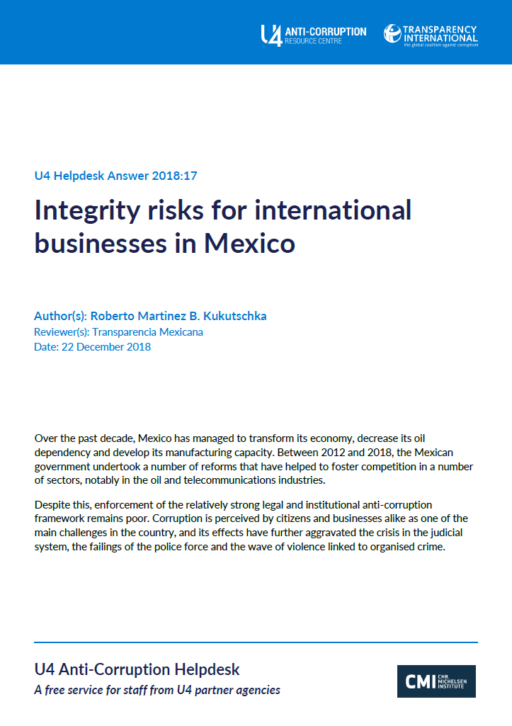