Earlier this year, the UK Government introduced the Police, Crime, Sentencing and Courts Bill. How do the following provisions compare to other G7 countries, Russia, and China: a) conditions for limiting protests, b) definition of and sentencing for “public nuisance”, c) criminalising damage to memorials?

The UK’s Police, Crime, Sentencing and Courts Bill (2021) has raised concerns that it will have a chilling effect on the right to protest (Amnesty International UK 2021; Siddique 2021). In particular, the Bill proposes to introduce limitations to protests based on loosely defined criteria around noise levels, as well as to establish harsher sentences for “public nuisance”, a vaguely defined offence including causing “serious distress, serious annoyance, serious inconvenience or serious loss of amenity.” The Bill also criminalises damage to memorials.

Research conducted for this Helpdesk Answer has uncovered very few examples of legislation in other G7 countries, Russia or China that includes noise as a potential condition for limiting public demonstrations. In recent years, several states in the United States have sought to establish legislation that rules that “annoyance”, “distress”, or “inconvenience” can be a ground to limit protests. However, a number of these proposals have already been defeated prior to enactment, and observers expect constitutional challenges for others. Finally, several states in the United States, as well as Russia and Canada, have legislation that criminalises damage to memorials. 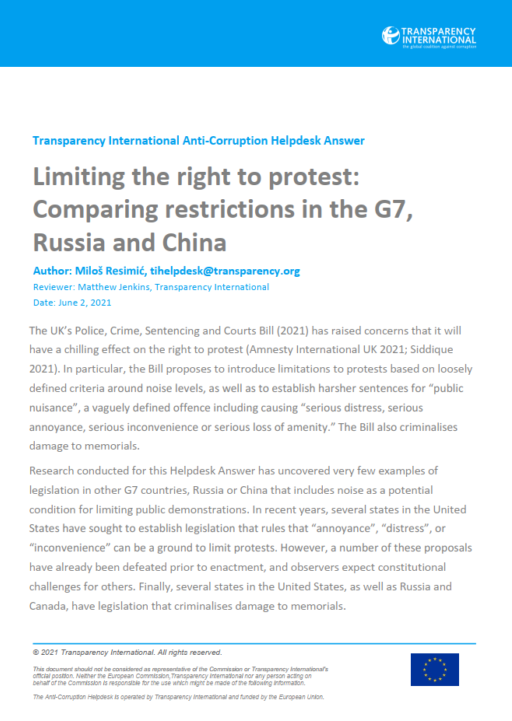