Please provide an overview of anti-corruption initiatives in Madagascar, with a focus on the natural resource exploitation and stakeholder in anti-corruption.

The Republic of Madagascar has witnessed repeated political instability, including coups, violent unrest, and disputed elections (BBC News 2018). Despite the return of democratic elections in 2013, after a 2009 coup, and the recent 2018 elections which saw the peaceful transfer of power between 2013 elected President Rajaonarimampianina and Andry Rajoelina. inefficient governance, poverty and economic instability fuel corruption and push the population to dangerous mining, looting of forest resources and trafficking in wildlife products to sustain themselves.

Organized networks of traffickers connected to local and national-level politicians and decision-makers have emerged in the mid-2000, under the Ravalomanana presidency. They gained considerable power between the 2009 coup and the 2013 elections - a period referred to as “Transition - under the ruling of current President Andry Rajoelina. Several natural resources like rosewood, sapphire, and vanilla are illegally exploited. Gold mining, on an artisanal and small scale, appears controlled by a network of powerful traders who are allegedly involved in smuggling. Government officials appear to be complicit or incompetent to stop the smuggling. Artisanal gold mines also continue to be hotbeds of human rights abuses. Global climate change has had an adverse effect on Malagasy resources and populations with an increase in cyclonic activity, erratic weather patterns and severe drought. Nevertheless, there are several environmental organisations working to mitigate these effects.

While regulatory and institutional frameworks are more or less in place, the implementation of anti-corruption policies is lacking, while the state is described as repressing civil society activists and curbing journalistic freedom, especially with its 2017 Communication Code. 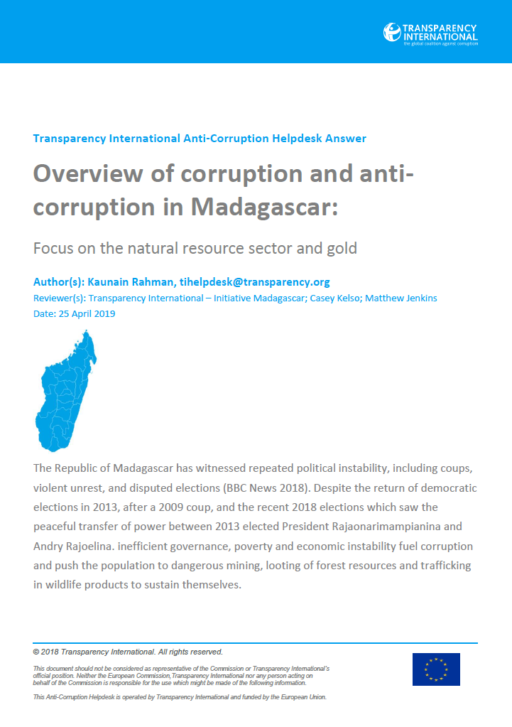