The Kingdom of Saudi Arabia is an absolute monarchy, commonly viewed by observers as an authoritarian state (IBP 2017). With severely limited civic space and freedom of expression, the country has witnessed escalating suppression of dissidents and severe human rights abuses (CIVICUS 2018; Freedom House 2019; Human Rights Watch 2019a). Although there have been high-profile measures to curb graft in recent years, many analysts view the anti-corruption drive headed by the crown prince as motivated primarily by a desire to consolidate political power (Kirkpatrick 2019).

While the effective implementation of anti-corruption efforts is largely at the discretion of the country’s rulers, corruption is viewed by observers as a significant issue in the country (Freedom House 2019; GAN Integrity 2019). Notably, almost total opacity in public accounting prevents ordinary Saudis from understanding how much of the state income generated by massive oil revenues ends up as private wealth for the royal family and its clients (Freedom House 2019; Hertog 2019).

Where systemic checks and balances in the form of transparent and accountable public institutions are absent, control of corruption is largely dependent on the political will of incumbent leaders, who may instead choose to employ targeted allegations of corruption against adversaries. Literature reviews indicate that in environments with restricted civil and political rights such as Saudi Arabia, anti-corruption strategies are less sustainable as they are unable to draw on the full range of anti-corruption measures, many of which rely on the participation of non-state actors (Kukutschka 2018). As such, any improvements in reducing corruption in these settings are contingent on the caprice of a few individuals, meaning progress in clamping down on malfeasance is likely to prove fragmentary, short-lived and volatile (Transparency International 2019b). 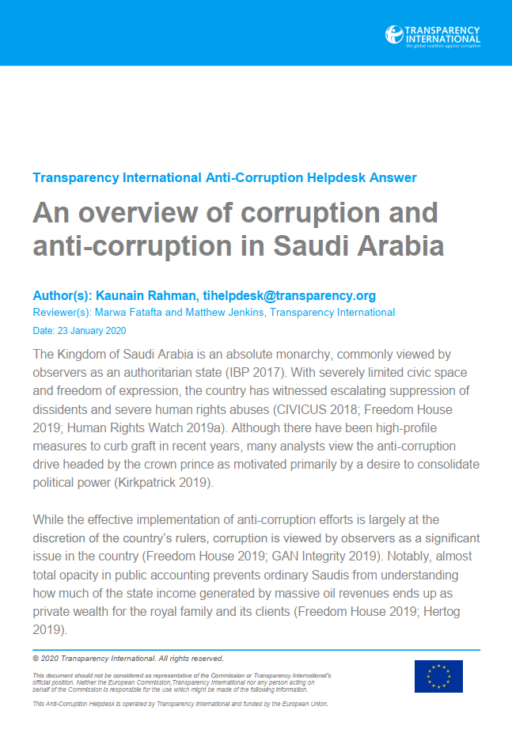