Please provide an overview on the relationship between corruption and protest actions (rallies, actions, demonstrations).

From Bosnia Herzegovina to Ukraine, from Afghanistan to Tunisia, from South Sudan to Brazil, “popular outrage at governmental corruption is a common theme in political crises” (St George’s House 2015). Nonetheless, the relationship between corruption and popular protest is a nuanced one. First, academics contest the effect that perceptions of corruption have on citizens’ political action. While a substantial number of studies have argued that high levels of background corruption act as a catalyst for protest (Beyerle 2014; Johnston 2005a), others such as Peiffer and Alvarez (2016) have contended that widespread corruption actually reduces citizens’ political engagement.

Second, some scholars make a distinction between protests that are specifically “anti-corruption” in nature on one hand, and on the other hand protests driven by a broad array of grievances that may be related to corruption, including on matters such as fraudulent elections, unpaid wages and poor macroeconomic performance (Lewis 2020: 4). While protesters in the latter case might not always be explicit in identifying corruption as the prime target of their action, it often plays an underlying role as a driver of their discontent. Moreover, movements protesting about various socio-economic grievances often do consciously choose to articulate their complaints using narratives of corruption (Smith 2014). Nonetheless, precisely because the term “corruption” is so often used by protestors to cover a broad range of economic grievances and democratic failings, it can be difficult to determine what actually drives the emergence and durability of anti-corruption movements (Bauhr 2016: 6).

In the case of dedicated anti-corruption protests, there is a third cleavage in the literature studying potential trigger points of such popular unrest. In particular, there is a lively debate about the type of corruption most likely to provoke protests and demonstrations. Studies looking at African countries have concluded that grand, high-level corruption is more likely to generate protest, whereas research in other countries – notably China – suggests that street level bribery is more likely to lead to protest. What appears clear is that different forms of corruption have “diverging impacts on contentious politics by altering the costs and benefits associated with mobilising to protest” (Lewis 2020: 3).

Finally, considerable work has been done on the role of social movements in advancing anti-corruption work, specifically considering how to sustain protest movements, and convert flash-in-the-pan outbursts of political activity into more durable forms of anti-corruption activism. 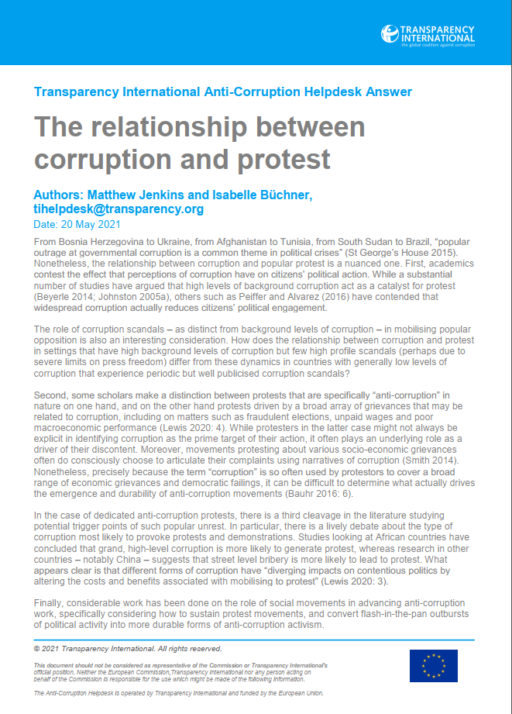