Please provide an overview of the impact of PFM interventions on corruption, including the role that PEFA has had during the last decade, with examples on how PEFAs have been used for improvements/changes.

Public financial management (PFM) is regarded as a central element of a functioning administration, and underlies all government financial activities. The main stages of the PFM cycle are revenue collection, budget preparation, budget execution, accounting and reporting, and audit and oversight. Improving a country’s PFM system is widely believed to provide extensive and enduring benefits, including stronger institutions, reduced poverty, greater gender equality and balanced growth.

Because of the centrality of PFM to development, development practitioners (the European Commission, International Monetary Fund, World Bank and the governments of France, Norway, Switzerland, the United Kingdom, Slovak Republic and Luxembourg) introduced the public expenditure and financial accountability (PEFA) framework to assess PFM performance in a country. The outcome of the performance assessment is generally used as the basis for discussions on PFM reform strategies and priorities by countries and development agencies.

Evidence shows that interventions at every stage of the PFM cycle have a positive impact on curbing corruption, and a recent report also found a positive correlation between PEFA scores and perceptions of corruption. However, the available literature also underscores that ultimately, political support is a necessary condition for PFM reforms to have a significant impact on reducing corruption.

a. What is public financial management (PFM)?

b. What is public expenditure and financial accountability (PEFA)?

2 Impact of PFM interventions on corruption

— The PEFA framework was revised in 2016. It assesses PFM performance using 31 indicators across seven pillars: budget reliability, the transparency of public finances, the management of assets and liabilities, policy based strategy and budgeting, predictability and control in budget execution, accounting and reporting, and external scrutiny and audit.

— Empirical evidence and the literature generally support the view that PFM reforms have a positive impact on reducing corruption. However, many of the findings are based on perceptions based indicators of corruption.

— Evidence from the available literature and case studies show that technical improvements on PFM are dependent on the political will to implement them. 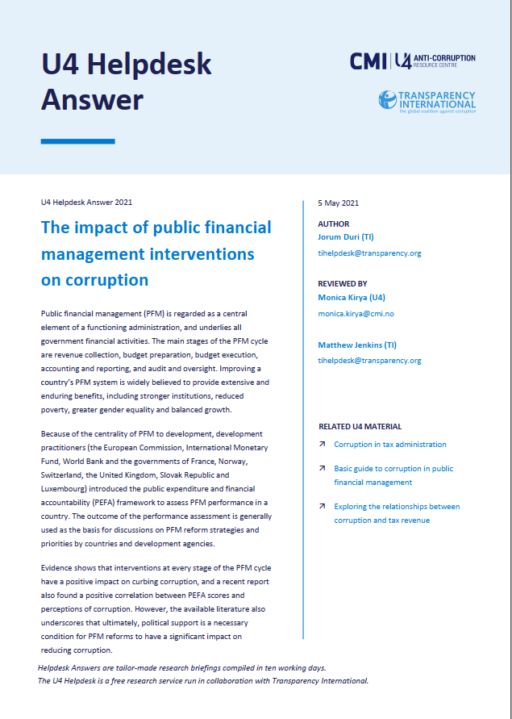