Please provide an overview of the literature on links between illicit financial flows and inequality.

In addition to this, IFFs reproduce inequality in several ways. First, IFFs are associated with less efficient economic outcomes, lower rates of poverty reduction and more rent-seeking behaviour. Second, IFFs reduce state capacity and, in particular, the revenues needed to finance development and state building. Third, IFFs are often associated with state capture and deteriorating institutional quality. Fourth, IFFs have disproportionately detrimental impacts on those citizens already most “left-behind”, given their effect in facilitating and exacerbating corruption and conflict in the poorest countries.

This literature review focuses on evidence of links between inequality and illicit financial flows (IFFs). It is not a review of financial secrecy practices, the structures or methods that enable legal or illegally acquired capital to be transferred illicitly or initiatives to limit IFFs. The review attempts to build on rather than duplicate previous literature authored by Transparency International, notably the recent Topic Guide on Illicit Financial Flows. In addition, this review examines newer literature and does not make use of studies older than a decade.

The sources used in the review come from a variety of disciplines, such as political science, geography and economics, and from academic journals, think tanks, international organisations and NGOs. In much of the literature, the link between inequality and IFFs is assumed to be self-evident. As a result, not many studies explicitly conceptualise these links or measure their correlation. This review attempts to work around this problem by looking at literature that assesses the broad societal impact of IFFs and then synthesising this evidence in reference to what is known about inequality. 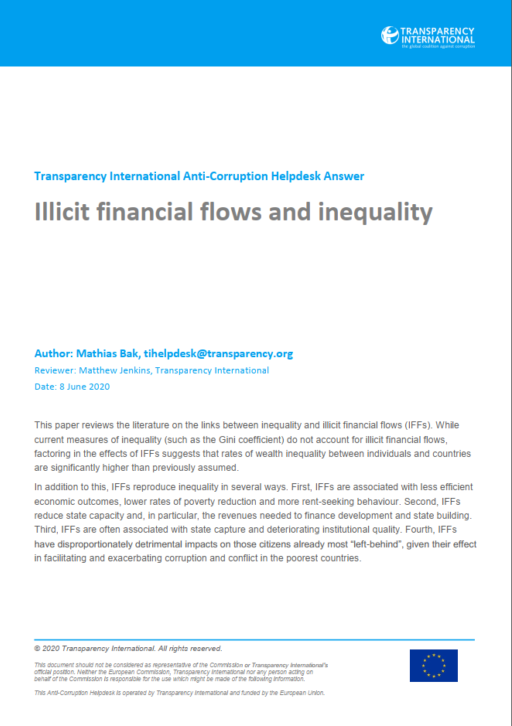